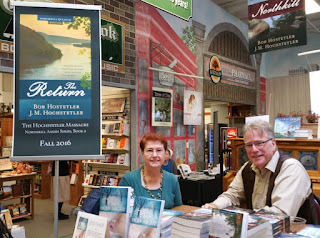 Bob and I participated in the annual Holmes County Largest Book Signing at the Gospel Book Store in Berlin, Ohio, this past Saturday, November 14, along with 36 other authors. That’s a mass of books and writers, and we thoroughly enjoyed being a part of it! The weather was perfect and we had a great turnout for the event. Not to mention that Berlin was absolutely cram-packed with tourists checking out the shops, antiques stores, and restaurants.

We had a fun day, sold some books, talked to several folks who are related to us somewhere along the line, and did a reveal of the new cover for Book 2, The Return. You can see it on the poster in the photo on the left, and it’s posted in the sidebar. Let us know what you think! In talking with bookstore proprietor and cousin Eli Hochstetler, we set the date for our national release for November 12 next year at the 2016 annual Holmes County book signing. We’re pumped!

Bob and I also took the opportunity to touch base and do some planning for The Return. Bob had the idea of shooting a video of the two of us talking about the story of our Hochstetler ancestors and what it’s meant to us to write Northkill. Bob’s editing it, and we’ll post it online as soon as it’s up to his stringent standards. He was terrific, btw, and I’m just hoping I was reasonably coherent!

Head on over to Bob’s blog, Hither and Yon, to see more photos of the signing and the action in Berlin and get his take on the day. And stay tuned for regular updates on The Return. 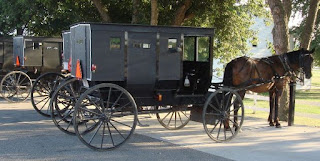 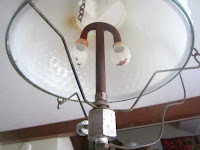