The renewed Amish Mennonite group initially met in members’ homes every 2 weeks, but in 1866 they began to meet in the Hochstedler School ¼ mile south of the current church building and started a Sunday school. The minister, Benjamin Schrock, was in favor of building a church house, and in 1876 the congregation acquired land to build on at the church’s current location, CR 600 N-700 E in northeastern Howard County near the Miami County line. The first structure the congregation built was a plain frame building measuring 22 x 40 feet.

Howard-Miami, like every congregation, wasn’t immune to controversy. One of the worst happened around 1885, when a disagreement arose over whether it was acceptable for men to use buttons on their vests instead of the customary hooks and eyes. Some men were already wearing them on their coats, but the more conservative members felt they should not be used on the vests.

It became such a divisive issue that the church held meetings to try to resolve the dispute, with ministers from Wayne County, Ohio, coming to help work out an agreement. Instead, the disagreement grew worse, and no communion services were held for over 2 years because of the rift. The church finally resolved the issue in the spring of 1887 by agreeing that the men should follow their own preference regarding hooks and eyes versus buttons.

During this time there were few young people in the congregation. That fall, John S. Coffman from Elkhart, who had been instrumental in resolving the dispute over buttons, returned to preach, and possibly due to his influence younger people began to attend the church in significant numbers. Coffman helped to persuade the church to begin holding services every Sunday.

With the Sunday school thriving, the congregation grew until they needed a larger building. So in 1888 the church sold the old structure to the Brethren Church, and it was moved 3 miles west to serve that congregation. The new building was only slightly larger, at 36 x 50 ft. It was dedicated by Coffman on August 3, 1888. In 1894, the widow Sarah Hensler sold ¼ acre from her farm to the church for $25, and the land was added to the west side of the church lot.

In my next post, I’ll bring the story of Howard-Miami Mennonite Church into the 20th century.
Posted by J. M. Hochstetler at 8:04 PM No comments: 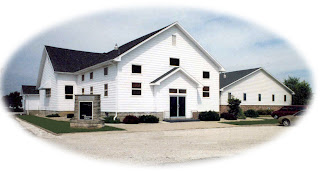 On November 8, Erik Wesner wrote about the Kokomo, Indiana, Amish on his blog Amish America. If you’re not familiar with his blog, I recommend that you hop on over and take a look. I was especially interested in this article since I grew up in the Howard-Miami Mennonite Church, which formed as a result of a church split due to the progressivism he mentions in his article.
When I married I moved away, and over the years I became a member of several different denominations. But deep down I’ve always considered Howard-Miami to be my home congregation. My parents, Alvin and Lula Hochstetler, remained members until their deaths in 2002 as the result of an accident, and we held their funeral there. They’re buried in the Christner Cemetery a couple of miles down the road. I still have cousins who attend, so the ties remain.
After reading Erik’s article, I decided to dig out my copy of the History of Howard-Miami Mennonite Church, published in 1998 for the celebration of the 150th anniversary of the church’s founding, and share some of the history it records. The following condensed version, including the quotes, is taken from this book.
The first Amish settlers came to Miami County from Holmes County, Ohio, in 1848. While they established homes and farms, they met in members homes every other week, as is customary for the Amish. But in 1854, “changing viewpoints as to what was acceptable in regard to all of the new ideas and inventions coming into the world during a time of great and rapid advancement in man’s learning and technologies” caused a church split. “Some people began to see that not all change is evil, while others continued to believe that the more complicated the new things made life, the more readily the element of evil could also enter” (p. 21).
This difference in values led the members to break into 2 separate bodies. “There were many hard feelings among the people on both sides of the split. Each side felt very strongly about the position they had taken, believing themselves to be correct in God’s sight. People on one side looked down on th people on the other side, each thinking the other was falling into sin. Sadly this resulted name calling, and a lack of compassion and understanding created a great deal of ill will in the community” (p. 21).
The progressive group began to meet in an old school house a half-mile east of Waupecong. Roads were almost nonexistent, so getting to the church was difficult. Then the minister, J. Benjamin Schrock, left because of the ill will in the commuity. This led to a decline in the number of members of this group, and for some time they ceased meeting and some members joined other churches. Meanwhile, the conservative group initially flourished due to their continuing, stable leadership.
During the mid 1860s, the progressive group began to meet again for regular hymn sings. Eventually they ordained ministers and established the congregation that in time became the Howard-Miami Mennonite Church. Originally calling themselves Amish Mennonites, they now prospered while the conservatives, who took the name Old Order Amish, began a decline that lasted until around 1897, when Amish families from other areas began to move into the community. They then developed the 2 church districts that remain today.
The Howard-Miami congregation developed its own schisms as time went on. In my next post I’ll continue the history of this congregation.
Posted by J. M. Hochstetler at 8:37 PM No comments: