Do you like barns? I’ve always had this thing for these imposing structures. Which is probably to be expected since I’m the daughter of Mennonite farmers and grew up on a farm. You get a mystical feeling standing in an old barn with its huge hand-hewn beams and hay mows overhead, roof timbers soaring high above like the ribbed vaults of a cathedral, and dust motes lazily trailing down through the golden sunbeams that slant through the cracks between the weathered boards of the exterior walls. I even have a Pinterest board devoted to Barns and Farms.

So today I’m going to indulge in my addiction and take a look at the barns of the Germans who settled in during the 18th and 19th centuries. Descended from generations of farmers, the Germans who immigrated to during the 1700s were among the best farmers in the colonies. The soil they found in this new land was unlike the over-farmed soil of their homeland in that it required little fertilization. So they went to work, and after building a house and clearing land for fields, they built immense Swiss-style bank barns like the one shown on the left of the James Barn, located in , .

The first log structures were soon replaced by barns built of stone, and later frame or even brick, with shingled, slate, or tin roofs. Most barns had 3 levels, with a threshing-floor and granary on the main floor and expansive mows for storing hay above. The lower level provided stalls for horses and cattle and a milking parlor. These buildings were anywhere from 50 to 60 feet wide and 60 to 120 feet long, and typically the main level protruded 8 to 10 feet beyond the lower level, as you can see in the picture at right from the Pennsylvania Historical Museum and Commission. 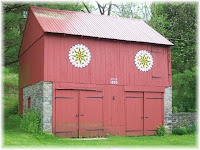 The classic barn is most commonly found in the southeast and central parts of the state and was the most prevalent barn structure to around 1900. Most closely associated with the Pennsylvania Germans, it developed during the later 18th century with the spread of diversified grain-and-livestock farming that required efficient labor management to produce cash grain crops, primarily wheat; feed grain for cattle and horses such as oats, corn, and hay; and livestock that provided beef, dairy products, and pork to eat and to sell.

Some of these barns had stars, hearts, diamonds, quarter-moons, or other designs painted on their sides and ends. The picture above from my Pinterest board shows what we typically envision when we think of Pennsylvania German barns adorned with painted symbols. It’s of newer construction, and it has both plank and stone cladding.

Last summer I visited Carriage Hill Farm, an 1880s German Baptist farm in . Although this farm dates to the late 19th century and is located in , the barn retains many of the features you’d see in earlier structures. To the left is a shot I took of the barn’s main level. You can see the hand-hewn beams above the threshing floor. Obviously tobacco was a cash crop here. Below right is a picture of the grain bins along the right side of the threshing floor, each neatly labeled with the grain stored inside.

The last picture, below, is of the barn’s lower level, showing a walkway between one of the stalls on the left, with storage bins and feeding troughs for another stall on the right. Clearly these barns were designed for the greatest labor efficiency, with gravity allowing hay and grain to be fed down to animals on the lower level with the least amount of effort. Indeed the barn was the farmer’s most important tool for his work.