In my previous post I covered the beginnings of the Moravian Church in Europe, the Moravians’ beliefs, and their missions outreach. Today we’ll take a look at one of the most notable of the intrepid Moravian missionaries who ventured from Europe to other countries to spread the gospel: Christian Frederick Post.

Post was born in Prussia in 1710. Little is known of him until 1742 when he came to Pennsylvania with the Moravian migration that established Bethlehem, Pennsylvania. He initially worked to form a church federation among Christians of German heritage in that area, but his ability to learn native languages made him more suited to organizing native groups.

Between 1743 and 1749 Post ministered to the Moravian Indians living in the Hudson Valley in New York State and in western Connecticut. He earned the respect and trust of his Indian neighbors by learning their language and customs and by twice marrying native converts: Rachel, a Wampanoag, whom he married in 1743 and who died around 1745; and Agnes, a Lenape woman he was married to from 1747 until she died in 1751. Post had four children with his wives, but all died as infants. Suspicion and threats by local colonists against Post and his converts led to his being jailed in New York, then expelled from both New York and Connecticut. He returned to Europe in 1751. From there he was sent to Labrador for a time but eventually returned to Pennsylvania and his ministry among the Indians.

Post emerged as a significant figure in 1758 during the French and Indian War, when Governor William Denny enlisted him as his emissary to the Delaware, or Lenape, Indians living along the western frontier. Along with Pisquetomen, a Lenape headman of considerable influence, Post played a central role in peace negotiations between the English and the tribes allied with the French. The two men journeyed across Pennsylvania in spite of great danger from both colonial and native enemies to carry news of the 1758 Easton Treaty with the eastern tribes to the Indians living along the Allegheny and Ohio rivers. 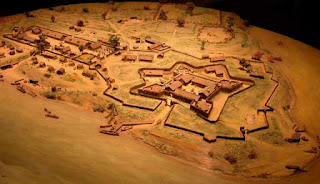 The western tribes gladly accepted Governor Denny’s offer to restore peace if they agreed to remain neutral while British General John Forbes attacked Fort DuQuesne. However, the Indian leaders emphasized that the English must withdraw from the Ohio Territory after defeating the French. If they did not stay east of the Allegheny Mountains, the Lenape sachem Tamaque warned, his people would again take up the war hatchet. A short time later, the government’s agents who were with Post insisted that the Indians had changed their minds and would welcome the establishment of forts in Ohio Territory. Post met with the Indian leaders, confirmed that they had not changed their minds about the presence of the English in their lands, and insisted on giving that message to the governor.

Late in 1761 Post traveled to the native settlements in Ohio’s Muskingum River Valley and built a cabin there before returning to Bethlehem for the winter. The next spring he returned to continue his ministry, accompanied by a young Moravian assistant, John Heckewelder. Again the governor of Pennsylvania enlisted him as a messenger, this time to summon Tamaque and other Indian leaders to a treaty at Lancaster. After the August treaty, during which he served as one of the interpreters, Post went back to the Muskingum to resume his missionary work. But that fall the Indians’ hostility against the Whites rose to the point that Heckewelder hurriedly left. Post was finally forced to flee for his life at the end of the year as events rapidly moved toward another war, this time under the leadership of an Ottawa chief named Pontiac and a Mingo chief named Guyasuta.

Post was motivated by faith, not politics, and these experiences convinced him that God’s work and politics don’t mix. He finally asked the governor not to employ him as an emissary if the promises given to the Indians weren’t going to be fulfilled. He came to the conclusion “that a man whose Caracter it is to bring Words of Goddely and immutable Truth to the Nations, ought to be somewhat more cautious than others in carrying to the same People worldly messages, as these latter are often subject to unforeseen Disappointments” and that “the Lyes of our Messengers will always expose us [missionaries] to Danger from the Indians.” (Quotes from “C. F. Post and the Winning of the West” by Walter T. Champion, Jr.)

Post married Mary Margaret Stadelman Bolinger in January 1763, and seeing that his efforts to maintain peace and convert the Indians had failed, set off for the Carolinas later in the year to preach among the Cherokee. In 1764 he sailed to South America to establish a mission among the Indians of the Mosquito Coast. But when he returned to Pennsylvania in 1767 seeking additional funding from the Moravians, he was told that his services were no longer needed. He promptly enlisted as a missionary with the Anglican Church and returned to Nicaragua, where h labored in the jungles into his seventies.

Post finally returned to Pennsylvania in 1784. He settled in Germantown near Philadelphia, where he died the following year, survived by his wife. Charles Thomason, a Quaker who was a contemporary of Post’s remembered him as “a plain, honest, religiously disposed man.” One of his fellow missionaries aptly described him as a “man of undaunted courage and enterprising spirit.” David Zeisberger and John Heckewelder are two of the spiritual heirs of Post’s missionary work among the Lenape. I’ll take a look at their lives and ministries in my next posts.

Christian Frederick Post shows up in The Return as he passes through Sauconk in 1758 on the way to a dangerous meeting with hostile Indians tribes to try to persuade them to abandon the French while in the very shadow of Fort DuQuesne’s guns. He appears again in 1762 at Tamaque’s settlement along the Muskingum with his young assistant John Heckewelder when he resumes his mission there and summons the Indian leaders to a treaty at Lancaster.

Post truly was a bold and faithful servant of Jesus Christ. In what ways does his example inspire you to live a bolder and more faithful life as a disciple?

My next post will take a look at another well-known Moravian missionary, David Zeisberger.
Posted by J. M. Hochstetler at 3:00 AM