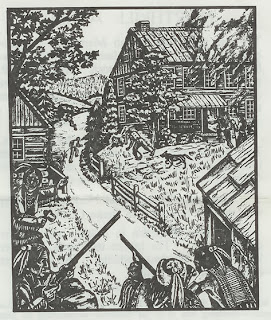 Bob and I recently sent out advance copies of Northkill to potential endorsers, and I can’t resist sharing the first one, just received today! It’s from my good friend Lori Benton, a new author whose debut novel, Burning Sky, is amazing and a must-read for all of us historical fiction readers! Her second novel, The Pursuit of Tamsen Littlejohn, releases in April 2014, and I can’t wait to get my hands on it.

“A riveting tale based closely on the life of the authors’ eighteenth-century Amish ancestors during the French and Indian war, Northkill kept me up nights unable to stop reading. The terror, grief, and peril faced by Jakob Hochstetler and his extended family and community are unflinchingly portrayed. Some cling to the hope that even through the most tragic and bewildering of circumstances a loving God has not abandoned them. Others struggle with doubt. Every character’s journey rings with authenticity. I look forward to the conclusion of this thrilling and absorbing story with great anticipation.”

Thank you so much for your kind words and encouragement, Lori!

In my next post I’m going to share the British deposition of our ancestor when he was found half dead of starvation after his escape from the Seneca in May 1758. It’s included in Beth Hostetler Mark’s book Our Flesh and Blood (1993) and was found in the papers of the British colonel who interrogated him: The Papers of Henry Bouquet,1972, Vol I, pp. 391-393.

As descendant of a common ancestor to Pioneer Jacob Beiler (Beyeler) and Bishop Jacob and his brother John Mast of NC of the Northkill Amish-Mennonite Settlement in PA, I am finding your writings of the people of that area during the period 1736 to 1800 most interesting. After spending time in Switzerland again this summer at Wahlern/Schwarzenburg, Guggisberg, and Rüschegg, where the Hostettler/Hochstettler, etc, Mast, and Beyeler ancestors lived since before 1500, Northkill becomes even more interesting to research and read about. Thank you for your excellent material!

Don, thank you so much for stopping by! I'm so glad to meet another descendant from the Northkill settlement. I'm hoping someday I can also travel to the homes of our ancestors in Switzerland and the Alsace and would love to write that part of their story too. It's really a joy to research and write about their lives.