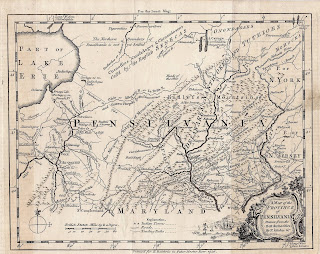 The Ordeal of Peter Williamson

A wealth of information has been preserved in the Pennsylvania Archives about the attack on the Jacob Hochstetler family, as well as in accounts handed down through the family. Another very helpful resource I found for fleshing out details is a first-hand account written by Peter Williamson, whose capture by the Delaware Indians in 1754 in the same general area echoes that of my ancestors to a remarkable degree.

You’ll find a pdf download of this book on my American Patriot Series website. It includes truly harrowing descriptions of massacres and torture, which I’ve only skimmed, if not skipped altogether. I recommend that anyone who wants to delve into this compelling story do the same. Following is an excerpt that begins with Peter’s treatment when he was brought to the village where he was kept, and then details the inhabitants’ practices, daily life, and moral values.

“Dancing, singing, and shouting were their general amusements; and in all their festivals and dances they relate what successes they have hand, and what damages they have sustained in their expeditions; in which I became part of their theme. The severity of the cold increasing, they stripped me of my clothes for their own use, and gave me such as they usually wore themselves, being a piece of blanket, a pair of mogganes, or shoes, with a yard of coarse cloth to put round me instead of breeches. . . .

“That they in general wear a white blanket, which, in war time, they paint with various figures, but particularly the leaves of trees, in order to deceive their enemies when in the woods. Their mogganes are made of deer-skins, and the best sort have them bound round the edges with little beads and ribbands. On their legs they wear pieces of blue cloth for stockings, some like our soldiers spatter-dashes; they reach higher than their knees, but no lower than their ankles. They esteem them easy to run in. Breeches they never wear, but instead thereof, two pieces of linen, one before and one behind. The better sort have shirts of the finest linen they can get, and to these some wear ruffles; but these they never put on till they have painted them of various colours which they get from Pecone root, and bark of trees, and never pull them off to wash, but wear them till they fall to pieces.

“They are very proud, and take great delight in wearing trinkets; such as silver plates round their wrists and necks, with several strings of wampum (which is made of cotton, interwoven with pebbles, cockle-shells, &c.) down to their breasts; and from their ears and noses they have rings or beads which hang dangling an inch or two. The men have no beards, to prevent which they use certain instruments and tricks as soon as it begins to grow. The hair of their heads is managed differently, some pluck out and destroy all, except a lock hanging from the crown of the head, which they interweave with wampum and feathers of various colours. The women wear it very long twisted down their backs, with beads, feathers and wampum; and on their heads most of them wear little coronets of brass or copper; round their middle they wear a blanket instead of a petticoat. The females are very chaste and constant to their husbands; and if any young maiden should happen to have a child before marriage, she is never esteemed afterwards.

“As for their food they get it chiefly by hunting and shooting, and boil, or roast all the meat they eat. Their standing dish consists of Indian corn soaked, then bruised and boiled over a gentle fire for ten or twelve hours. Their bread is likewise made of wild oats or sun-flower seeds. Set meals they never regard, but eat when they are hungry. Their gun, tomahawk, scalping knife, powder and shot, are all they have to carry with them in time of war, bows and arrows being seldom used by them. They generally in war decline open engagements; bush fighting or skulking is their discipline; and they are brave when engaged, having great fortitude in enduring tortures and death.

“No people have a greater love of liberty, or affection to their neighbours; but are the most implacably vindictive people upon the earth; for they revenge the death of any relation, or any great affront, whenever occasion presents, let the distance of time or place be ever so remote. To all which I may add, and which the reader has already observed, that they are inhumanely cruel. But some other nations might be more happy, if in some instances they copied them, and made wise conduct, courage, and personal strength, the chief recommendations for war captains, or werowances, as they call them.”

Researching my ancestors’ story has not only provided fascinating information about their lives, but has also inspired me with their amazing fortitude and faith as pioneers and as Christians. I hope Northkill will also inspire all those who read it to live faithful lives whatever their circumstances.
Posted by J. M. Hochstetler at 6:00 AM No comments:

In writing the story of our ancestors, I’m now at the point in where Jakob and his sons are being carried away from their home by the Indians who killed their family members and burned their farm. According to the account Jacob gave the British after he escaped from the village where he was held captive for seven months, quoted in Our Flesh and Blood by Beth Hostetler Mark, they were taken on a 21-day journey from his home near present-day Shartlesville, Pennsylvania, to the French stronghold Fort Presque Isle on the shore of Lake Erie.

The following vivid account of the ordeals Indian captives suffered is taken from The Descendents of Jacob Hochstetler.

Prisoners were always subject to many abuses on arriving at Indian Villages: every old squaw or young Indian would hit them with switches and sometimes clubs and tomahawks. This was known to Hochstetler, who had saved some of the peaches from his home. He now with his sons approached the chief and those near him and presented them some peaches. This so pleased the chief that he immediately ordered the abuses stopped. It also saved them from what is called running the gauntlet, which was as follows: All Indians in the village or camp, both sexes, young and old, would stand in two rows facing each other, armed with switches, sticks and sometimes tomahawks or other implements and the unfortunate captive was made to pass through between the two columns, every one striking and some endeavoring to impede their progress by throwing sand or dust into their eyes, and woe unto one that was slow in running; such a one was beaten unmercifully. At the end of the row stood the guardhouse, where the prisoner for the time was free; but some indeed never reached it.

The details gleaned from recent research all indicate that our ancestor Jacob must have been a strong, intelligent, resourceful, and persistent man to have endured what he did, found a way to escape and return home, and then pursue efforts to locate until finally his sons were returned to him. More important is the faith he demonstrated throughout his ordeal that serves as an example to us all.
Posted by J. M. Hochstetler at 6:00 AM No comments: