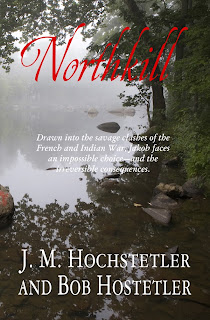 Fellow author and cousin Bob Hostetler and I started writing this fictionalized version of our Hochstetler ancestors’ story in 2005. At the time, we envisioned completing it within a couple of years at the most. But along the way, as is likely to happen, life took us on some winding paths. Now, after eight years, numerous projects, and repeated queries from family member who want a copy asap, we’ve finally gotten off our duffs and resumed work on this long, sprawling, epic story!In order to get at least part of Northkill into print by the end of the year, we decided to break our original concept into two volumes. The first book will take our ancestors from 1752 to the end of September 1757, as the survivors of the Indian attack are carried away from the ashes of their home, separated, and given to different Delaware clans. The second part, tentatively entitled Return to Northkill, will be published later and will cover the period of our ancestors’ captivity, the efforts of the family’s older children to find their father and brothers, and the captives’ eventual return home to the Northkill Amish-Mennonite community.I'm going to present another workshop on writing family historical fiction at the 25th Hochstetler Gathering coming up the 19th and 20th of July. And it occurred to me that it would be exciting to have the first few chapters of Northkill available in book form for attendees as a preview. With Bob’s permission I did a fast and furious production. The designed pages are ready, we have preliminary cover, and we’ll go to print next week. A limited number of copies will be available at the Gathering for a donation of $3 to cover expenses. This exciting 132 page book will include the first 6 chapters, along with the first scene of chapter 7, which takes place on the afternoon of September 19, 1757, the day of the attack. Bob and I are thrilled to share our vision with readers, and we look forward to feedback as we focus on finally completing Northkill.
Posted by J. M. Hochstetler at 4:50 PM

Looking forward to buying the book when it comes out. I'm also a descendant.

It's good to hear from you, Dodi! I'll keep the blog updated on our progress with Northkill. I'm hoping to have it out next January.

Looking forward to your book! I descend from Mary Rolandson who's family was killed, and she, her daughter and pregnant niece where kidnapped by Indians in MA in 1675.